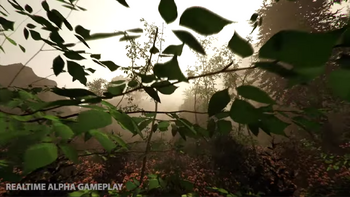 This is the weather after a storm.

The Weather is a gameplay aspect in The Forest. While on the island, the player will face rain, snow, and sunny days.

The developers stated that with max settings, the player will be able to see water laying around pretty much everywhere after it rains. They also mention that the weather patterns will be changing and at random.

The majority of the island experiences rain storms. These storms are characterized by starting with an initial lightning strike followed by light to heavy rain. These storms decrease visibility and the water can be seen flowing down the terrain towards the ocean.

In the tundra and mountains, the storm is a snow flurry of varying degrees. While the visible signs of a storm (snowflake density) doesn't seem to change, the wind becomes noticeably louder during 'heavy' storms.

Snow storms always give the "cold and wet" status effect to players who aren't wearing full thermal armour. Rain is characteristically different, generally only giving the cold status effect during night, or towards the northern side of the island. It should be noted that the status effect is ongoing, and will reapply as soon as the player leaves a heat source.

Fires and torches burn out much faster during storms, thus making it challenging to completely avoid the cold status effect during poor weather. It is recommended not to use torches during storms unless you have a significant amount of cloth to spare. Fires also will normally completely extinguish if not tended to during rainstorms, which requires them to be completely rebuilt.

The primary usable implication of weather is in using it as a water source. Rain will fill water collectors (at varying speeds depending on storm severity), as well as held old pots. Currently (up to v0.40), water collectors will be filled in the tundra and mountains just like they would in regions where it instead rains. It is unclear if this is a mechanic that is going to be altered/replaced, but as far as v0.40, it is in full effect.