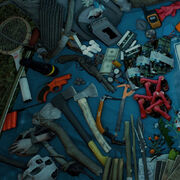 A selection of weapons and tools in the player's inventory.

Weapons in The Forest are anything that have the ability to kill, excluding Traps.

Weapons are primarily used to defend yourself against enemies encountered all over the Peninsula, but some of them are also valuable tools used to gather resources and hunt animals. For example, axes can be used to chop down trees to gather logs, spears can be used for fishing, the crafted bow or modern bow can be used for hunting and the Flare Gun could be a possible last-resort light source.

Many other inventory items that can be held by the player can be used as a weapon, like skulls, meats, bones or even body limbs such as legs, heads and arms.

These are all the axes in the game, the machete is technically classified as an axe as it can cut down trees, the climbing axe cannot cut down trees however:

These are assorted melee weapons, most can receive upgrades:

These weapons have ranged capabilities. All require ammunition except for the spears, which can be thrown and then retrieved:

These are all single use, but they have a high damage output:

These are mostly used as materials though they can be used as weapons: