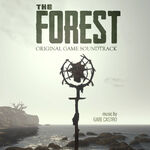 The Original Game Soundtrack of The Forest is composed by Gabe Castro. (Official website)

Currently, most music tracks have been removed or not added to the game. The developers stated, words to effect of It was too repeatitive and took away their intended vibe they wanted from the game. We hope to add more tracks, though we need to make sure they fit into the game and that they don't take away immersion. The soundtrack is currently unreleased ; an official digital version will be available when the game will get its final version (confirmed by the composer). All the music can be viewed and seen on YouTube via the links below.

The soundtrack can be listened on the composer's YouTube channel.