From The Forest Wiki
(Redirected from Sharks)
Jump to: navigation, search

Sharks can typically be seen swimming long before the player is in any danger due to their tell-tale dark shape in the water. If the player gets too close, a shark will turn and charge towards them. A hit from the shark will destroy half of the player's health regardless of armor worn, but long as some distance is kept, they ignore the player. The player has to be rather close to the shark in order to provoke a bite, and bites can be dodged by jerking to the left as it tries to bite you. It will not immediately try to bite again, but will instead swim off for a bit. Sharks can be killed from the shore or any platform out of the water with 2-3 arrows (spears do not work). The shark will flail with each hit and, when dead, the body will sink to the bottom.

On the PC version of the game, setting the ocean quality to flat makes the detection of sharks and other underwater creatures or objects an easier task. 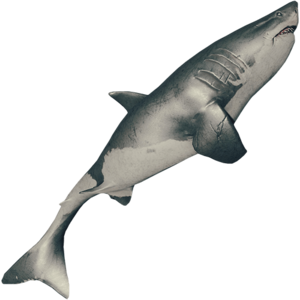