Schematics are a new game mechanic added to The Forest in update v1.10. They contain information on how to build certain structures that are hidden to the player until found. Once discovered, the player can access and build the schematic in their survival guide on the last page marked by a cross.

There are 4 schematics in the game currently. 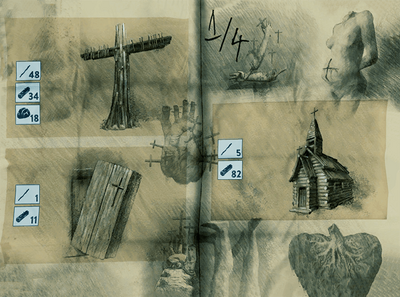 The first schematic is found in the Shipwreck Cave to the right of where the crossbow is located. Once unlocked the player will gain the ability to build the Cross, the Coffin, as well as the Church. The schematic page also contains some rough sketches of what appear to be a pregnant woman with a cross cut into her belly, severed arms surrounded by crosses, a heart pierced by crosses, what appears to be a second heart with crosses and upsidedown feet next to it, as well as the stump of what appears to be a sacred tree. 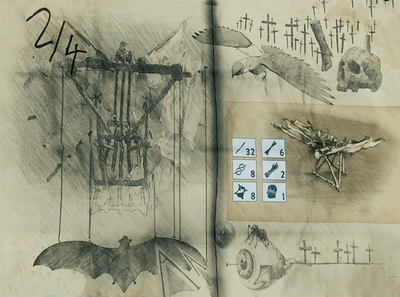 The second schematic is found in the Kanji Cave pinned to the back wall of the main cave room. Once unlocked the player gains the ability to create the Glider.

The schematic page also contains some rough sketches of what appears to be a bat overlayed on the frame of the glider with some angles drawn, a bird with its wing and head separated, a hoof of an animal, a skull with crosses, as well as an eyeball with crosses near it. 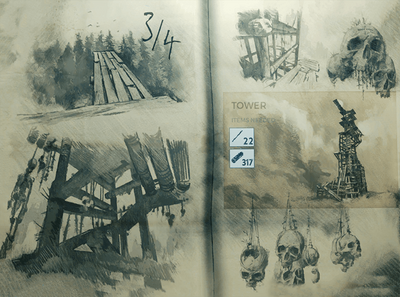 The third schematic is found in the Kanji Cave before the drop down to the room with all the papers. Once unlocked the player gains the ability to create the Tower. The schematic page is full of sketches of hanging skulls and skeletons as well as sections of the tower. 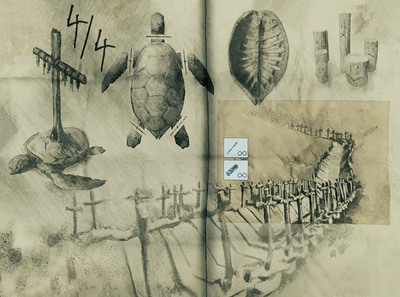 The fourth schematic can found in the cave to the southeast of the map, near the two small islands. Once unlocked the player gains the ability to create the Log Track. It also has images related to turtles, as well as a Cross embedded into a turtle's shell.