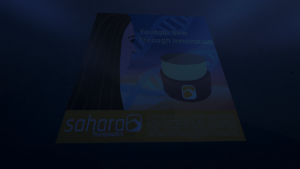 Sahara Therapeutics is a large company that deals with genetic experimentation. They own or owned the peninsula, along with the gigantic research laboratory deep underneath the forest floor. Their primary concern seemed to be dealing with youth and longevity, as evidenced by the ads posted around the lab, along with the Jarius Project (which is featured prominently in the orientation slideshow).


Note: There is a another laboratory, known as "Site 2", which is referenced in the ending where you activate the "Power Obelisk" to crash the plane. When Timmy looks at his bulletin board, a map can be seen with a location circled. A sticky note on the map, next to the circle, has "Site 2" written on it. It is speculated that this will be the setting for The Forest's sequel, Sons of the Forest, and that you will play as Timmy.