the river from near the western end 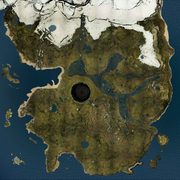 an aerial shot of the peninsula and the river

The river is the main body of water that flows through the middle of the peninsula. It is very large with multiple branches, and it requires in most places that the player swim in order to cross it. However, in several spots, there are shallow crossing areas, usually marked by the presence of several rocks. These crossing areas are frequently used by the cannibals, especially when chasing a player who has swam across the river. It appears to be fed with snow water from the mountain area.

Fish are plentiful in the river. Many animals hug the banks, including alligators, tortoises, rabbits, and lizards, but some will never be seen near it, such as the boar or shark.