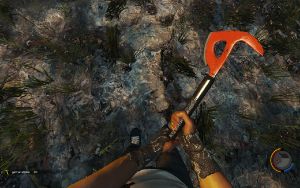 The visual effect on the ground during rain

Rain, also known in some cases as a storm or rain storm, is a weather occurrence in The Forest that happens at random. Occasionally, it will "storm" during the rain, causing lightning and thunder to also appear. If the player stands in the rain without a fire, they run the risk of acquiring the cold status condition. Snow is similar to rain, the weather system shows snow particles instead of rain if player is in snow area.

Rainbows are multicolored images in the sky that appear after rain or a storm. They do not affect gameplay. In real life, a rainbow is caused by light refracting through residual water in the air.