There are two Obelisks featured in The Forest, with a third hinted at. It is assumed they were created by the ancient ones.

The Resurrection Obelisk, or Res Obelisk, is a main part of the story. It is a supernatural artifact found in the Research Lab, deep underground, that can be used to resurrect the dead. In order to do so, it requires a live sacrifice. Depictions of this obelisk can be found in multiple places on the Peninsula, and include, but are not limited to: Obelisk Drawings found in the yacht, caves, and lab, and the Obelisk Photo and Obelisk Sketch, both found in a cave.

The obelisk itself resembles a demonic pagoda made of obsidian (similar to the stone doors). The front functions as an entry way, with both sides swinging open. The inside is filled with sharp stone "spears" that penetrate the sacrifice placed inside, similar to an iron maiden, presumably for their blood and perhaps "soul".

Sahara has clearly tampered with or modified this Obelisk. Bright red cords run from it to complex, modern machinery, suggesting a fusion of the old, Lovecraftian artifact to the new, medical-grade technology. It has two distinct "sides": the medical side, where the patient who needs to be brought back is placed, and the obsidian side, where the sacrifice is placed.

The Power Obelisk is also a main part of the story. It is a supernatural artifact found in the observatory section of the Research Lab, up in the mountains, that can be used to take down planes. It seems to be a sort of an EMP device, due to the nature of what it does.

It resembles a large, spiky, obsidian egg laying on its side. Unlike the Resurection Obelisk, it is held in the ceiling rather than on the floor. When in use, it pulses with a very pale blue light mixed with darker blue-green striations, and it emits a loud noise.

Sahara has also clearly tampered with or modified this Obelisk. The ancient artifact is attached via wires and machinery to a computer that allows the operating person to activate the obelisk via screen.

This section is theoretical and currently under debate / development. For further information, see the discussion page.

This obelisk is only hinted at and cannot be found by the player, and as such, remains mostly theoretical. It is an obelisk that, opposite of the resurrection obelisk, kills humans within its radius. It is possible that this obelisk uses radiation to kill everything nearby, and only the people who hid deep in the caves survived. However, the radiation causes mutations that create the basic cannibal. It can be evidenced by the groups of skeletons that can be found huddled together as in positions of fear and awe all together, as if they all died at once. The positions that these bodies are in suggests an unnatural, simultaneous cause of death, which would only be possible through something like a killing obelisk. (Note: This could just be an effect of the power obelisk firing.)

These victims can be found: 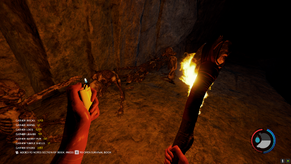 It is possible that the sacred trees are mythical in the same way that the obelisks are. The cannibals seem inexplicably drawn to the trees, and they're much larger and different looking than the rest of the peninsula's trees.