As part of the Unified Community Platform project, your wiki will be migrated to the new platform in the next few weeks. Read more here.

Mutants, previously called Cannibals, are the main type of enemy in The Forest. 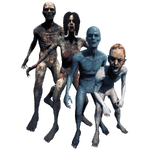 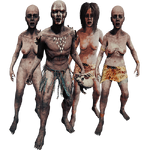 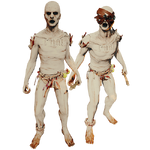 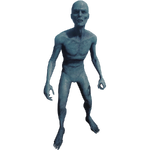 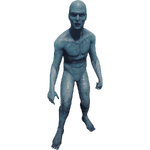 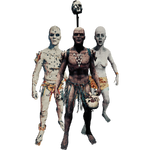 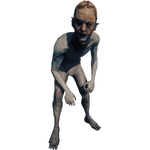 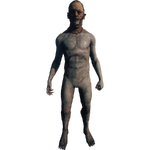 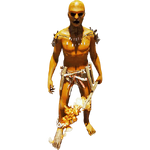 Types of mutants refers to their behavior, movement, and abilities. They can be found across most tribes:

Tribes refers to their appearance as well as their difficulty, listed from easiest to hardest:

Mutants are the primary enemies of The Forest. A scattering of primitive humans living in the Forest, mutants will seek out and attempt to kill any outsider that they can find on the Peninsula. They are not necessarily immediately hostile, as some may only spy on the player at first like the Regular Mutants, while others will attack on sight due to sheer hunger such as Starving Mutants. Both sets of mutants will actively patrol the island both day and night and, after several days, can be joined by the monstrous creepy mutants. Once aware of the player's presence, patrols will get stronger and become more frequent. It is recommended that the player build defenses as larger groups of enemies can be difficult to defeat. As the game progresses, the stronger types of mutants will spawn. Listed from weakest to strongest are Skinny Mutants, Regular Mutants, Pale Mutants, Painted Mutants and Masked Mutants. Fire Mutants will often accompany a patrol after 5-7 days in a game.

After the plane crash, the mutants will not immediately look for the player and the mutants may be unaware of the player's presence on the peninsula. It is possible, though difficult, to remain unnoticed by the mutants for an extended period of time, but it is essential that mutants are faced eventually in order to complete the story. Mutants will regularly patrol the land and, during this time, it is possible to kill a lone mutant and remain undiscovered. However if the player is seen and a mutant has successfully run away, it is possible that aggression will increase. For the first few days, simple fortifications, walls, and traps will keep the mutants from attacking the player. However, the mutants will eventually send creepy mutants to the players camp, which are much more difficult to defeat than mutants.

Note that mutant behavior is heavily affected by the difficulty level. On hard mode and hard survival, all enemies are much more powerful and aggressive.

Mutants (except Starving mutants) will be neutral to the player upon first interaction. If a player kills a lone Mutant, the rest of the tribe can remain unaware and therefore their stance remains unchanged.

Red paint and Effigies can force neutrality and passive behavior between the player and mutants of every kind, except Creepy Mutants.

Little is known about Mutant hostility and may be based on each encounter. It has been speculated by the community that the following actions will increase hostilities:

To decrease hostilities, it is perhaps best if players reduce the mentioned methods. However, the developers have stated they have purposely put some "fuzziness" into the AI to prevent players from fully understanding and predicting mutant behavior.

In areas where there are non-player traps and totems, mutants can be seen in the early hours of day praying to or worshiping the sun or one of their effigies along the beach. These locations are close to large villages, and appear to mark the outer limit of their camps. Mutants encountered whilst in the process of worship are non-hostile, however striking any of them will cause the one attacked to become hostile.

When multiple mutants approach a red-painted player, one may kneel while others attack or run. If the attacking mutants are defeated, the kneeling one will remain no matter what the player does. The kneeling mutant is possibly acting as a sacrifice, or simply wishes to surrender.

When not in combat, mutants may be seen burying their fallen soldiers. Currently, if the player kills a mutant and leaves the area, abandoning the corpse with other Regular mutants nearby to access it, the body will be gone if the player goes back to retrieve it, leading to the assumption that the mutants are removing the bodies. However, Skinny mutants will start to eat the body in front of the player.

There is a large difference in difficulty settings as to how mutants behave and attack: 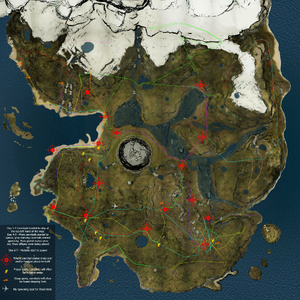 Patrol Map Done by Farket, current as of v0.71 - Does not include ALL routes, only confirmed ones

Patrols will form most of the encounters the player has with mutants and creepy mutants. The following videos are research that has been done on mutant patrol routes and their behavior. It is recommended to not build on patrol routes if one wishes to avoid conflict:

Patrols, part of the general mutant presence on the peninsula, are groups of mutants and/or creepy mutants that roam mostly pre-set paths throughout the forest. They have set spawn locations, and they will watch over these areas day and night. Patrols can be found almost everywhere, with the exception of the barrier islands that surround the peninsula. The most dangerous places to build are where mutant routes cross over.

Other than the cave system, mutants are also seen around the peninsula in camps of various size and location. The player may notice small scouting parties leaving them and single mutants wandering through them. Other than finding mutants in such camps, there are also chances of finding loot such as baggage and other brought in objects. Bodies can also be found quite frequently.

There is one large, central camp with the most huts, in the southern portion of the map. This camp has the most mutant activity out of any camp, and it contains one cave entrance on the North side (Formerly inside a hut.). This cave is where the player will awaken if caught by the mutants for the first time. Despite mutant's notorious fear of fire, especially the player's campfires, some camps appear to have one large campfire, which also appears to be recently used, too.

Enemies might attack when alone or in groups, and if the player is not careful they might ambush from behind. The mutants can be knocked down though it is much more difficult in harder modes. Sometimes the enemies will take evasive action if they see the player as a threat; they might even run away completely or come back later with more mutants.

In addition to attacking the player, mutants have also been seen "intimidating" the player. It is possible that they are testing the player to see what actions they will take next. To intimidate the player mutants will hiss and lunge at the player while another will circle the player and attempt to make eye contact. After a short amount of time the mutants will either attack or retreat further into the forest. It is currently unknown at the time if this is a glitch or if this was added to the game on purpose.

If the player proves too much for the mutants, they might run away into the forest and not return for a period of time. During or after combat mutants can also be seen climbing trees, and jumping from one tree to another or at the player.

Incapacitated mutants will sometimes be dragged to safety by other mutants.

Attacking a mutant will arrest any attack they may be performing. If they are to lunge at the player, and the player swings their weapon, the attack will stop causing the mutant to stumble backwards. Therefore, rapidly slashing can be a good multipurpose tactic when engaging a mutant. It offers offensive and defensive benefits, though the drain on stamina should be considered as well as flanking enemies.

Occasionally after killing a large band of mutants or while moving through territory with a mutant settlement nearby, a mutant may be seen sitting on the ground crying either in pain or mourning the death of others.

The death of a mutant, mutant, or animal in close proximity to the player may result in becoming splashed with blood and acquiring the "bloodied" status. Theoretically, being "bloodied" for too long is stated to result in acquiring the "infected" status by the suggestion to "avoid infection by washing" when covered in blood. Being infected leads to negative effects on "athleticism" and can be seen in the "health tab" of the survival book. To cure an infection eat raw Aloe Vera.