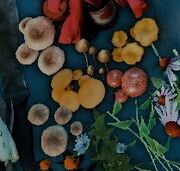 Mushrooms as they appear in the inventory

Mushrooms are edible fungi found throughout the Peninsula. There are 6 types: 4 are safe and 2 are poisonous.

They can be eaten directly to restore a small amount of hunger and energy, or collected with the pouch (up to 10 of each kind). Like berries, collected mushrooms do not spoil and can be eaten later, used for crafting, or planted in a garden. The player can only grow mushrooms in caves; however, they do not spawn there naturally and must be brought in from outside. As of v0.66, they cannot be grown in wall planters.

The poisonous mushrooms (Jack and Amanita) can be used to craft poisoned arrows. 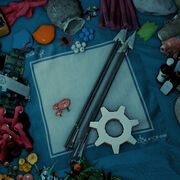 Amanitas being used to poison arrows

It is possible to grow all types of mushrooms.

To grow mushrooms, the garden must be built within the cave system. Mushrooms don't work the same as other plants when growing. Instead of yielding more mushrooms that are planted, they duplicate next to each other. If you fill the garden with mushrooms, they won't be able to duplicate. Ensure there is space free for the mushrooms to grow. To build a garden inside a cave, you will need to bring logs into the cave. This can be done by simple holding the logs, and walking inside the cave while holding them. This does not work for drop down caves.

There is an achievement called You are a fun guy which requires the player to Eat all mushroom types.

Some mushrooms can be difficult to locate, such as the Puff Mushroom. Console Commands can be used to add the mushrooms.

Poisonous mushrooms in the game used to make the player hallucinate when consumed, but this was later removed.

As in reality, the (edible) chantarelles and (poisonous) jack-o-lantern mushrooms appear similar and may be confused.