From The Forest Wiki
(Redirected from Hard mode)
Jump to: navigation, search

Game Modes are selections the player can make to change different aspects of gameplay. They may alter many aspects of the game such as difficulty, density of resources, altering the survival elements, effects of cold and heat, animal respawn rates, harder enemies, etc.

Once a Difficulty Mode has been selected at the start of a New Game, it is irreversible and cannot be changed without the use of mods. There are two changeable modes in the menu that are optional, they include Allow Building Destruction and Tree Regrowing Mode.

There are currently five difficulty modes or "difficulties" that can be accessed without the use of commands: 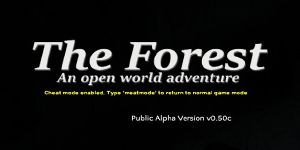 Peaceful mode will result in having the surface world free of any cannibals and mutants. The mode will not disable hostile fauna and visual gore content like mutilated dead bodies, blood, and cannibal effigies.

Peaceful mode was added in the v0.03 update of The Forest, and is the game's "easy mode". When it was first added, it was under the name of unlockable "veganmode" by code/cheat on main title screen. Since the v0.49 update, Vegan Mode has been implemented as an "official" game difficulty mode and can be enabled by choosing the "Peaceful" option whilst starting a New Game.

Normal mode is the standard game mode and can only be chosen thus far at the beginning of a new game.

It is the recommended game mode. 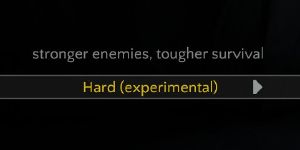 Hard mode selection as of v0.50c

The Hard mode is a game difficulty added by v0.49 update of The Forest, it must be selected when starting the game and cannot be disabled as of yet.

For more information, see the Changes in Difficulty chart. 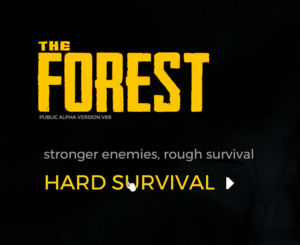 Hard Survival Mode in the New Game Options as of v0.69

Hard Survival Mode is a game mode that was added to The Forest in v0.69.

This mode will cause less animals and fish to appear in world, and with a longer respawn after killing them. Greater & faster cold penalties. Fire has been made more dangerous to the player. More food required per meal to fill stomach. Thirst comes faster. Slower respawn on gathered herbs. Meat spoils faster. It’s easier to get sick or infected and there are greater penalties from sickness and infection. A rebalancing of poisonous food, drinking bad water and eating out of date food. Along with this there is a much lower amount of spawned suitcases.

For more information view the Changes in Difficulty chart.

These effects are in Hard Mode, they are also included in Hard Survival Mode:

"Creative Mode" refers to a world type that has no enemies, "static"/ unchanging stats, and no need for resources when building. It can be unlocked by completing the game.

These modes can be changed during the game at any time, with the exception of dedicated servers. They will need to be restarted. 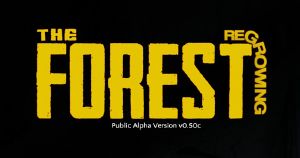 The Regrow Mode is a cheat/alternative game mode to the normal game mode, added by v0.42 update of The Forest.

The gameplay settings with regrowing trees on.

It can be enabled by selecting "on" Regrowing Trees at the gameplay settings. To disable the mode, just select "off" again.

When enabled, 10% of cut down trees and small trees will grow back each time the player sleeps. The mode can be combined with the Vegan, Vegetarian, Raw Meat and Iron Forest modes. It can enabled/disabled on existing saves at any stage of the game, in any difficulty. To prevent a tree from regrowing, the player must remove the stump.

The mode can be used in multiplayer, but requires to be enabled by the host to have an effect on game. Although breaking realism, this mode is a nice alternative for players who wants to build a large base or many structures more easily as the regrowing trees will provide almost infinite source of logs, and alternatively avoid the proximity of the base to become a stump field by keeping a lush forest.

"Sleep enough times without cutting down any trees and eventually the entire forest will be repopulated !" - Developer's patch note.

Allow Building Destruction is an interchangeable mode that can be access in the options game play menu at any time. It allows the player to make their structures invulnerable which can make the game easier if the player wants a more peaceful game. It was originally called Iron Forest Mode and it had to be unlocked in the main menu screen though it has since been changed to an interchangeable game option.

When enabled, once a construction is complete, it will remain indestructible and will not be damaged by the cannibals, the mutants or by the player. If the player wants to remove a structure, they must disable the mode in the game menu screen first and reload the current game save. [citation needed]

The mode can be used in multiplayer but requires to be enabled by the host. It can be useful to prevent unwanted damages from malicious players.

(Much of this needs to be updated) In The Forest, the player can press some key combinations while at the main menu screen to activate or deactivate different alternate game modes.

You are to type these codes on the main menu, where you find the title screen. There is no console, you merely type and watch the logo change if you have done it right.

There are currently 3 alternate game modes (with one extra code to return the game to normal):

In order to activate these modes, the player must type :

After the successful activation of a code, the game's logo will change to something different in each case: 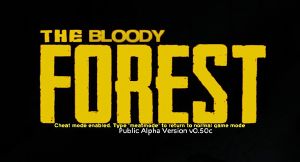 The Raw Meat Mode is a permadeath game mode added by the v0.40 update of The Forest.

It can be enabled by typing rawmeatmode at the main menu screen, and disabled by typing meatmode in the same way. If successfully enabled, the word "Bloody" will be added to the title. When enabled, this mode will turn the "second" or "true" death in single player into a permadeath. The player is only allowed to save the current game in one unique slot: If the player truly dies, the save will be permanently deleted.

It cannot be combined with Vegetarian mode, but can be used in a Hard Mode, and with the Iron Forest and Regrow modes.

The Raw Meat Mode can be enabled/ disabled on an existing game save, at any stage of the game. However, if the player loads an existing save, they will not be allowed to save his current game in another slot with the mode enabled.

Update: 26.07.2019 the picture in the main menu will not change at all, even if you activate the mode correctly. The only way you can confirm this is in the game after you saved the game for the first time. The second save will be only on the save slot you choosen before. All other slots cannot be used. But you can choose any save slot freely for the first save. 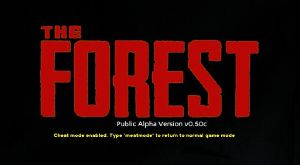 The Vegetarian Mode is a cheat/ alternative game mode added to the regular mode, added by v0.13 update of The Forest.

It can be enabled by typing vegetarianmode at the main menu screen, to disable type meatmode in the same way. If successfully enabled, the title will turn red. This mode can be enabled/ disabled on all saves at any stage of the game and can be stacked with the Regrow, Iron Forest, and Hard Mode.

The Vegetarian Mode will disable mutants and creepies on the surface world during daytime, though enemies will continue to lurk in caves.

These modes have been replaced the contents here has not been updated. 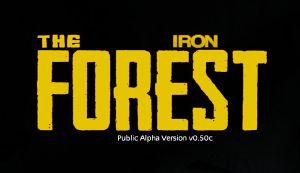 Iron forest mode is now known as Allow Building destruction mode. The Iron Forest mode is a cheat/alternative game mode than the normal game mode in The Forest.

It can be enabled by typing ironforest in the game menu screen. To disable the mode, just type ironmode again. It can be combined with the Vegan, Vegetarian, Raw Meat and Regrow modes. It can also be applied on an existing save at any stage of the game, in any difficulty.

When enabled, once a construction is complete, it will remain indestructible and will not be damaged by the mutants, creepies or by any player. If the player wants to remove a structure, he must disable the mode in the game menu screen first and reload the current game save.

The mode can be used in multiplayer but requires being enabled by the host. It can be useful to prevent unwanted damages from malicious players.

Vegan mode is now known as "Peaceful Mode". The Vegan Mode is an alternative game mode than the normal game mode, added by v0.03 update of The Forest. Since the v0.49 update, the Vegan Mode has been implemented as an "official" game mode and can be enabled by choosing the "Peaceful" option when starting a new game.

It can be enabled by typing veganmode in the main menu screen. When successfully enabled, the words "An Open World Adventure" will appear below the title. To disable it, type meatmode. It can be combined with the Regrow and Iron Forest modes.

When enabled, the Vegan Mode will result in having the surface world and the caves free of any mutants and creepy mutants. The mode will not disable hostile fauna and visual gore content like mutilated dead bodies, blood, and cannibal effigies, nor will it disable the final boss of the game.

It can be enabled/disabled on an existing save at any stage of the game. However, choosing "Peaceful Mode" before starting a new game is irreversible and the saved game will be permanently free of enemies.

It's important to note that if you use the Vegan Mode for too long, mysteriously the enemies will be at the worst hostility level.