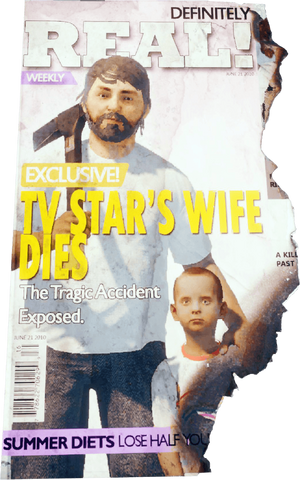 Player with Timmy in Real! Magazine

Not much is known about Eric's life before the events of The Forest, other than he has a son named Timmy and that he had a wife who passed away. The Real! Magazine can be found in the cockpit, suggesting that his wife's death is a relatively recent event. It is implied that he was a Canadian celebrity actor who had a survival show, it is revealed that he is the author of the survival book along with Author Sam Sounde who was the books co author. He and his son are flying back to Canada from a trip to New York (see the Plane for more details). He seems to be a skilled survivor, as he can easily start hunting, climbing, diving and building shelters. He is also flying with a survival book, something most people haven't even bothered to read, so it can be assumed that he was interested in survival techniques before the crash.

Events of The Forest[edit | edit source]

After the plane crashes, Eric is thrown out of his seat and into the aisle of the plane. He wakes up on the floor and sees a man in red paint picking up his son. Eric futilely attempts to reach him, but passes out again. He eventually wakes up, and gathers what supplies he can find scattered around the plane. Most importantly, he finds the Plane Axe embedded in a stewardess and takes it, resulting in his first weapon in the game. After this, he begins to explore with the ultimate goal of finding Timmy, though he also has secondary goals such as finding the other plane passengers, building himself shelter, and more.

While looking for Timmy, Eric runs into groups of savage cannibals, who appear to be from different tribes. He can use the tribe differences against the cannibals, sometimes tricking them into fighting each other so that he can escape. Other times, he is forced into a life-or-death battle, armed with his plane axe and any other weapons he manages to find or craft. Eric discovers a vast cave system beneath the forest floor, and he finds various items (such as drawings and toy parts) suggesting that Timmy had been there, but alas Eric is always too late to find him. Eventually, he will run into mutants, vile aberrations who are much stronger than the regular cannibals. Eric defeats them, too. Along the way, he will find several hints to a company, Sahara, being on the peninsula, along with a keycard. Once he traverses his way to the bottom of the sinkhole, he can discover the vault door, which opens with the keycard.

He enters the vault, and finds the Sahara research lab, hidden deep beneath the cave system. The lab looks to be greatly in disarray, with bodies everywhere and walls and piping having collapsed. There are seemingly no inhabitants, suggesting a mass evacuation or massacre. He eventually makes his way to a room containing the Resurrection Obelisk, where he discovers his son dead inside. Devastated by his death, Eric lays him down on a nearby bed (with wires running to the obelisk) and he tenderly places Timmy's toy on his son's corpse. Eric notices the cords running to and from the machine, and on impulse, he places one cord on Timmy, causing the machine to prompt him for more. He places all the cords on Timmy, and the machine prompts him for a new specimen, re-opening the obelisk. Eric heads off to find his specimen.

Shortly thereafter, he runs into Dr. Matthew Cross, dead in an office nearby, with crayons shoved into his neck, mouth, ears, and eyes. At this point, through the culmination of collecting the autopsy report, restraining order, various notes (here and here), emails, and more, Eric understands that the Red Man was never a cannibal after all, but rather a scientist working for Sahara lab. Dr. Cross' daughter had died in a violent attack, and so he conspired to use the resurrection obelisk to bring Megan back to life.

Eric then follows bloody footprints leading deeper into the facility, supplemented with various drawings that belong to Megan. He tracks them to the end, discovering many test rooms and corpses along the way, along with information that suggests that Sahara is responsible for creating the cannibals and mutants in their quest for immortality. Eric comes to a final door with a bed outside, with one last drawing of an angry Red Man that looks monstrous, with the caption of "Daddy". This suggests to the player that Megan killed her father. Upon crossing the final threshold, he discovers Megan sitting in a large open room, surrounded by drawings and playing with a toy plane. As Eric gets closer to her, she turns to face him, revealing her mouth, feet, and hands to all be covered in blood. She flies her plane around, then crashes it, and points to him, suggesting she knew how he got to the peninsula. Megan begins to have a seizure, and Eric backs away uneasily. The girl begins to undergo a mutation which results in her turning into a monstrous mutation, the Boss Monster. It immediately begins a forceful assault on Eric, forcing him to fight for his life, killing her in the process. After doing so, he carries her body back to the Obelisk, and places her gently inside.

The machine beeps angrily at Eric, and it informs him that a live specimen is required. Megan's corpse slumps out of the obelisk, and a new keycard falls off of her. Eric collects that, and, following signs to a second artifact, uses it to access an elevator. He then makes his way to an observatory within the northern mountain, and finds a desk apparently connected to a second artifact, which lies above him in the ceiling. After contemplating his options, he activates the second artifact, and in turn, shoots down another plane.

If Eric shoots down the plane it is suggested that Eric kidnaps a survivor from the plane and then uses them to resurrect Timmy. One year later, they are rescued and both appear on a TV show, where Eric is revealed to have written a book about the crash, and his survival. The host then asks Eric to come up with him, and use the Modern Axe. As the host and Eric compete in a friendly wood chopping contest, Timmy starts seizing violently, the player slowly shakes his head as he watches Timmy shake just like Megan. The screen cuts to black for about 5 seconds then cuts back to the the screen. Eric runs up to Timmy on the ground and holds him. Almost immediately, Timmy's shaking slows and comes to complete stop within about 5 seconds. Timmy opens his eyes and looks at his father. After that, it cuts to Timmy in a shower looking through his eyes. He looks at a wall covers in information about the peninsula but then his arms start randomly bulging outward and shaking as he looks out a window at a city, which is likely something he has struggled with since his revival.

If Eric chooses to shut down the artifact he'll take another route out of the labs through a cave. He then spends a few seconds staring at the plane, he'd otherwise have crashed, in the sky and then burns his photo of Timmy implying he's letting go of his son. After this the player will unlock mannequins of Timmy and his Wife.