Join The Fan Lab, a private Fandom research community for users in the US and UK where you will be asked to share your opinions on all things gaming and entertainment! Click here to see if you qualify

From The Forest Wiki
(Redirected from Creepy mutants)
Jump to: navigation, search

Creepy mutants are enemies in The Forest that are considered to be more challenging than standard mutants.

Whilst most commonly called "mutants" or "abominations" by players, they are actually more correctly called "Creepy mutants". 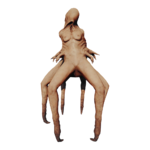 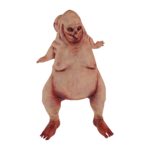 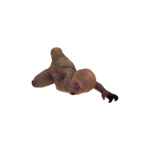 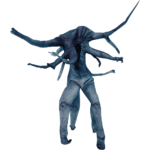 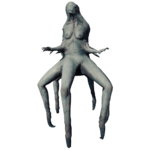 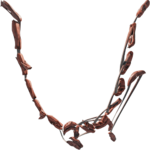 Creepy mutants are some of the most deadly enemies found on the peninsula. They are larger and more dangerous than the standard peninsula mutants, able to kill the player and destroy structures in just a few hits. The Creepy Mutants are grossly disfigured, and seem to be made of multiple bodies stuck together.

Creepy mutants are rare, but can generally be found in caves and are even less commonly found above ground in the beginning. When the standard mutants become more hostile in response to the player's impact or violence, they become more common and once the player has had multiple, repeated negative interactions with all mutants, packs of creepy mutants will start to surface, traveling in groups of three to four.

Creepy mutants are monstrous creatures that come in two types: combined bodies into "super" humans (Armsy, Virginia, and Cowman) and deformed and underdeveloped humans (Mutant Babies). Both have a taste for human flesh, regardless, like the mutants. They are few in number and are formidable opponents. They can be most often found in caves, though repeated violent interactions between the player and the cannibals will bring them to the surface.

Creepy mutants are ferociously large and dangerous. They appear to be made of multiple bodies smashed together into a gross combination. Some have several arms (Armsy), some have several legs (Virginia), and some are just fat and overgrown (Cowman). They are often followed up by skinny pale cannibals, which act like scouts. Once they detect a player, the creepy mutants will almost immediately attack. Creepy mutants are very strong with much more health than the average enemy. Each can tear through even full bone armor after multiple direct hits.

In the deeper parts of caves, the player is able to find mutant babies lying on the ground. They usually appear in tandem with the Virginia, and like other mutants, will start spawning above ground once the player has had enough violent interactions with the cannibals. Their AI seems to function as a homing device to the player, and the babies will crawl towards the player until they are within jumping range. They will then launch themselves violently through the air at the player, dealing a moderate amount of damage upon impact. They can be identified by the distorted baby cries they make as they jump. Luckily, they can be killed with one hit from any weapon.

It is suggested that the use of the resurrection obelisk will often generate obelisk victims, as seen in Megan and suggested in Timmy. However, the obelisk victim form seems to change based on the characteristics of the person put inside; i.e., the mutations are not the same every time, though Sahara was possibly manipulating who they put in to get the same results every time, in the name of science (which led to an abundance of the same 3 types of mutants). Girls possibly become Virginias, and boys would become Armsy or Cowman, though this is unconfirmed. Zachary could be the original Cowman, with the missing siblings becoming Armsies. No explanation is given for why Megan reverts to her human form after being defeated, while all other mutants stay in their mutant form after being defeated.

When fighting creepy mutants, fire makes a very good weapon on normal mode. It allows the player to damage them without being too close for too long. Torches, flare gun shots, fire arrows , molotovs or explosives are the safest bet. Poison is also a great friend, its damage input won't change like fire damage does in harder modes, and will slow them down as well. Fire damage is significantly reduced in harder modes, though can still be useful for stunning creepy mutants, especially the cowman.

A perhaps even safer, easier and effective alternative is simply building campfires; if a mutant steps on the fire, it will be engulfed in flames and like most enemies, quickly succumb to death. If you build several ground fires in your camp and your camp is situated next to a body of water, you can simply stand/wade safely in the water and wait for the mutant/s and any other enemy creatures to walk over the fire. Additionally, if you happen to step on any of the ground fires yourself, you only need to run back to the water to extinguish it.

Spears also deal significant damage when thrown, though the player will have to maneuver around the mutant to be able to pick up the spear and use it again. Using a spear bag can greatly help.

The player should be wearing some type of armor, preferably bone armor, before attempting to fight a mutant, especially if the player is going to attempt melee combat.

Creepy mutants also seem to be unable to swim, yet this does not prevent them from running into water. Virginias and cowmen have been seen charging into lakes. This can be used as an advantage if the player finds themselves outmatched. However, creepy armor cannot be harvested from the drowned mutants.