The Christian Missionaries are a group of visitors / peninsula inhabitants who were present many years (possibly centuries) before the events of the game. Their presence can be seen through various abandoned campsites with tents, boarded up walls with crosses hung, bibles and loose crucifixes on the ground, and more. They appear to be the authors of both the Latin Paper and the Virginia Sketch, along with creating at least one known obelisk drawing in Cave 5. They were aware of the mutant presence, which is most likely why they boarded up many entrances to the caves and hung crosses on it, so as to warn newcomers not to enter.

It is assumed that the Missionaries purposefully traveled to the peninsula in order to witness the marvels of the resurrection obelisk. This is suggested by the fact that the missionaries were traveling with several tents and dynamite when they set up their camps. They seemed intent on exploring the cave system, and most notably are seen quite a lot around Caves 1, 3, 9, and 5, along with their remnants being found on various sinkhole ledges in a few cases. 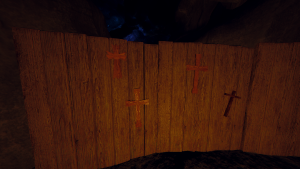 Unfortunately for the Missionaries, they ran into Virginia mutants at least, let alone Armsies or Cowmen. The Latin Paper serves as a warning to not explore deeper into the caves, and they also apparently boarded up all the entrances they could find, hanging crosses as, again, a warning.

It appears that the Missionaries, at least what was left of them after the mutants attacked, died when the Death Obelisk was activated, leaving their radiated corpses in Cave 5. They died all at once, all apparently reaching out to the wall where a large obelisk drawing is depicted.